Contact Us at Dance Floor Kings and Other Things, Inc.

We'd love to help you with your next event.

At Dance Floor Kings We Support the Love of Dance

We love dancing! Why else would we run a dance floor rental business. Dancing is great for exercise, self-expression, artistic displays, and to connect with community. There’s so many good reasons to get up and dance.

And because we think you may like dancing too, we decided to write up a little piece on the history of dance. If anything, it will give you something to talk about in between dancing at your next gala, wedding, bar/bat mitzvah, sweet sixteen or corporate event. 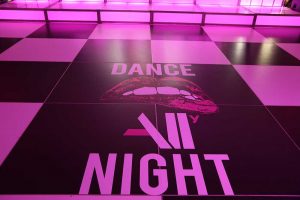 A Brief History of Dance

No one can accurately pinpoint the exact beginning of the history of dance. As civilizations began to put down roots, leaving behind structures with paintings and carvings, tools, pottery and what may have been early, primitive instruments, we can begin to formulate some ideas.

Dance was wound tightly into the fabric of early societies with a sense of purpose. Religious rituals, spiritual gatherings and social events all had their own special dances. People danced for rain, and they danced before going to war. They danced for a good hunt and they danced to celebrate the seasons as they passed.

As a form of expression and communication, Egyptians, & Greeks are among the societies where dancing was used to communicate ideas and stories about the great gods and their relationship with men. As more time passes, and societies get broken into both wealthy and lower classes, dancing begins be used more and more as entertainment. By the start of the Renaissance, ballet becomes a part of the wealthy class while basic “chain shaped” dances performed by commoners became wide-spread.

As the Renaissance continues, new dances and accompanying music begin to travel. Eventually Baroque dances from French and English courts replaced the Renaissance ones. Polkas and waltzes replace those. Waltzes get replaced by early forms of ballroom couples dancing. Going into the 20th century, modern dances continued to be invented, like the Foxtrot, Tango, Charleston, Swing. Eventually we come to the Postmodern forms of dance, now including Hip-hop, breakdancing and even more to come.

Not Everyone Accepts Dance is Moral

Throughout the years, some groups, communities or factions have deemed dancing to be amoral. There are various reasons for this line of thinking, and hey we don’t judge! Yet over the years, these groups have dwindled in numbers and are not a main part of most societies today.

Dance is Entwined in Social Celebrations

And yet, whether banned or not, all these years later we still dance, although more for social celebrations and entertainment unlike earlier times. The sacred temple dancer has been transformed into the Burlesque queen.